Peering into Hazy IPA – How a brewpub changed IPA

Celebrating the launch of Goose Island’s Role Of 6 Hazy New England style IPA, I thought we’d have a closer look at this sub-style of IPA that has enthused the tastebuds of hopheads around the world.

Beer has gone through many evolutions, revolutions and innovations through the centuries. Technological developments have made our beer more consistent, better quality, given us different flavours, more flavour, less flavour, darker beers, paler beers... I could go on! Hazy IPA is just one of the latest incarnations of this ever-growing family.

Brewers have tried to make their beer clearer and brighter ever since paler malts were widely available and as glassware became more universal. If I can actually see my beer, I want to see that there’s no bits bobbing about in it, I want the golden amber colour to sparkle and light to dance through the prisms of the glass. Many early 19th Century glasses had sculpted ‘lenses’ cut into them to allow the light to show off the colour and clarity of the beer. Hazy IPA has taken a left turn and a double-back and is a beer that proudly relishes its cloudy appearance.

When production of IPA shifted from London to Burton, one of the benefits was that the water enabled brewers to get a clearer beer. Did we get bored of clear beer? What started this unstoppable trend for hazy IPAs? Hops are largely to blame.

The pursuit of ever hoppier beers with huge amounts of dry-hopping are the culprit. Heavy dry-hopping creates haze in beer that can be challenging to remove. It seems that small breweries chose not to remove this haze and it started to become a badge of honour. More recently-developed hop varieties are giving many beers pronounced tropical, sweet citrus and stone-fruit aromas and flavours, and these are the ones that have struck a delicious note with drinkers.

Who brewed the first Hazy IPA?

The Brewery that lays claim to have stared this particular ball tumbling down the beery hill is Alchemist in Vermont. A modest brewpub owned by Jen and John Kimmich, they started brewing an occasional unfiltered heavily dry-hopped double IPA sometime in 2003. The result was hazy, fruity, strong and delicious. Heady Topper, as it is known, started to be canned in 2011 and that was when things got crazy for Jen and John as demand for cans of this New England specialty got serious. Craigslist adverts were charging over $250 for a single can and fans were travelling from miles around just to buy a few tinnies of this rare sort of beer.

Breweries from around Vermont and other parts of New England got in on the act and hazy IPAs or New England IPAs had become the most desirable style to pour into an orangey, murky and juice-filled glass.

What’s in the haze?

Now for the science bit…..

Haze in beer is formed by a number of things. Proteins and yeast take centre stage here. Yeast that is used to ferment sugars into alcohol can be left in the beer once the job is done. Proteins are a particle which come from hops as well as cereal grains. Barley can give protein particles to beer but wheat and oats have a lot more. Protein can be attracted to yeast to former larger, more easily-seen particles. Polyphenols are another compound that we find in malt and hops that contribute to the cloudy appearance of unfiltered beer, as they also combine with protein to form visible particles. Polyphenols in high enough concentration can make beer taste astringent (drying or harsh). Yeast can taste a little like bread dough, but also a little bitter and astringent as well, so brewers need to be careful to balance the hazy look to the mouthfeel and taste.

Where next for the NEIPA?

Evolution never stops and brewers have tried to take this style to the next level by adding fruit, lactose sugar, oats and wheat. These ingredients amp up the flavour, sweetness, smooth texture and of course haze. A rash of NEIPAs have emerged with varying degrees of success. I’ve seen beers that look like grey/brown puddle water and beers that get such an astringent mouthfeel from the haze, but when you find a good one, you are treated to mouth-watering layers of juicy citrus with tropical and stone fruit that the wonderful hops deliver to the brew.

Andrew Walton, Goose Island’s top brewer in the UK, used six punchy hops to bring a cacophony of stone and tropical fruit front and centre to this extraordinarily juicy beer. Here’s the breakdown of flavour contributions:

The hop character isn’t just fruit though. There are hints of flowers and pine resin too, bringing in layers of flavour to the peachy, tropical paradise. Andrew added wheat and oats to the grist to get to a perfectly hazy appearance and satin-like texture to the mouthfeel. The balance that good NEIPAs achieve is in maintaining a bright orange colour that transcends the cloudiness, and this beer looks like freshly squeezed mandarin juice! The smooth mouthfeel has light notes of bread and the rounded finish develops into a harmonious tangerine skin and pith bitterness that balances the fruit basket palate.

Are Hazy NEIPAs here to stay? It would be a brave person to bet against them and in this beer-lover’s opinion they are no flash-in-the-pan craze. They have appealed to a fresh group of beer fans and as the summer finally gets going, the combination of vibrant flavour and refreshment wrapped in a beery package will continue to appeal and has firmly become part of the liquid landscape. 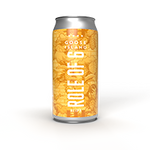